Called to the Middle East

At YWAM San Jose, we have different projects in Costa Rica, besides our schools and outreaches outside the country. Besides that, we will send out a new team to the Middle East to spread God’s love and start a new YWAM location. Here is the personal story of one of the leaders of the team, we hope this encourages you to follow whatever God is calling you to!

In July of 2014, a dream was planted in our hearts. We were in a time of prayer for persecuted believers in the Middle East, at the height of ISIS attacks, and we felt a deep sense of calling to go be peacemakers in that region.

We had been serving in Central America for four years at the time, newly married, and spending the majority of our time on the streets of San Jose with the people known as “the least of these” - youth, men, and women caught in the trap of sex slavery and prostitution. We knew that our time in Central America was temporary, a place that would serve as a launching pad for our future in missions, so when God put it on our hearts to move to the Middle East and serve amongst some of the most forgotten and war-torn communities, it came as no surprise. 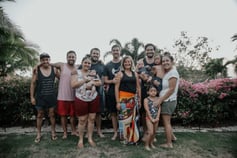 Since that day in July of 2014, we have been working towards the fulfillment of this call. Preparing ourselves by serving in a variety of roles and leadership positions at YWAM San Jose, studying Islam and frontier missions, leading groups of people to different Middle Eastern and unreached Nations, and of course, doing our homework on the country where we’ll be planting a new YWAM location with our pioneering team - which consists of 8 adults and 4 young children.

Our launch time in the last week of April is rapidly approaching, and God’s grace and favor with us have been so apparent. We are full of mixed emotions but we hold steady to His promises as we know His plans for the people we go to work alongside and serve are even greater than our own. As we approach our date of departure from Costa Rica and set our eyes on our new home in the Middle East and all of the goodbyes, planning, and logistics that come with it, Ephesians 3:20 is what comes to mind and gives me peace, “Now to Him who is able to do far more abundantly than all that we ask or think, according to the power at work within us, to Him be the glory.”

Called to the Middle East

How to Raise Funds

What to Pack for DTS